The Doctor Asked if We Have a Possum in the House? 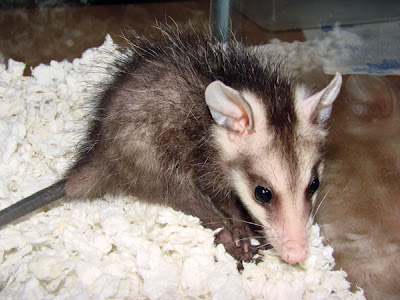 Thus was the reason for Darlene's sudden breathing problems, CONVENIENTLY the day after I rescued this baby female Virginia Opossum from the skimmer basket in our swimming pool. I found her frantically treading water after noticing an unusual wake in the pool early one recent morning. I saw right through Darlene's plan. I knew the Doctor. He was good, but not that good.
Many have asked, "Why keep a opossum"? I guess it goes back to my childhood. I raised many types of small mammals as a boy but one of my most vivid chilhood memories involves a pet opossum and an old country gentleman I met while traveling to the family farm in Checotah Oklahoma.
I acquired that particular opossum from a classmate in Elementary School. His father found it clinging to it's dead mother and since everyone knew I had a menagerie at home, I got the call. I remember having to actually barter for this opossum though, and after offering several aquatic turtles from my collection, the deal was made.

"Baby" as I named him, became one of my favorite pets. My mom helped give him milk with an eye dropper and he fast became part of the family. He was even able to stay in the house, for the most part. I can still remember my dad finding him asleep in his boot while getting dressed for work one morning.

So when we made the trip to Checotah that one long weekend, Baby went right along. Today the trip from Fort Worth to Checotah takes about 5 hours but back then, it seemed to take all day. I rode the entire way in the back of dad's 1960 Ford pickup with Baby in an old wire bird cage. After crossing the Red River, we stopped at an old country gas station. An older gentleman working there saw Baby in the back of the truck and, I remember this like it was yesterday, offered to trade a mynah bird he kept in the station for my opossum! I politely refused his offer. I've thought about that old man many times over the years and I can still see his face. For the longest time, I wondered why he would want to trade a somewhat expensive, talking bird for a common opossum. Now, after owning parrots for many years, I CLEARLY KNOW WHY! Opossums are much, much quieter!

I don't remember every detail of that weekend. I remember the drive up and the drive back. I remember finding another opossum with my cousin Terry down in the creek. It was a large female with a pouch full of babies. We took her back to his house and put her in his guinea pig cage. I remember throwing the soiled cloth in the bottom of Baby's cage and hitting (and it sticking to) Terry's face. It's funny what you remember from your childhood.

I took a baby, orange-ish colored guinea pig, born there on the farm, home in the wire cage with Baby. They made the trip together fine. Afterwards, they actually lived together, for a time, in a large outdoor cage my dad built for them.

I still remember the day I let Baby go. He stayed around our small farm for several days. I'd find him in the barn, in the garage or under the house. One day I couldn't find him and I never saw him again. I remember how sad I felt that he left me. Over time, I felt sure he wandered off into the neighboring woods and found a suitable mate to start his own family.

I've owned and raised many animals over the years, everything from foxes to bobcats but that one opossum has always had a special place in my heart. You just don't forget a pet like that. So now, many years later, I've told Darlene to tell her Doctor "Yes, there IS a possum in the house"!

They're Not Venomous and MAN Are They Cool! 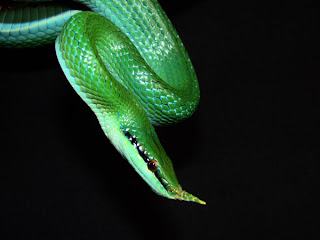 When any rare or odd snake becomes available in the trade, my whole being yells, "I've got to have one"! Such was the case when I started seeing photos of the Vietnamese Rhino Rat Snake (Rhynchophis boulengeri).
Originally described by science in 1994, this beautiful snake is still uncommon in collections. So, when I was finally able to stumble across a well started pair in late 2005, I jumped at the chance to own these rare gems.

Horror stories about getting newly hatched babies to feed were the prevalent topics of conversation when I sought out information on the species. And since they naturally occur in the mountainous rainforests of north Vietnam and south China, the semi-tropical climate of Brownsville seemed to pose another challenge. Regardless, I poured food to them through the winter, bound and determined I would be successful in the husbandry of these magnificent animals.

Winter (what we have of it) came and went and by late March, I felt I had put enough size on both animals to attempt breeding. Within minutes of placing them together, the male began courting the female. Copulation was observed a short time later and actually continued over a period of nearly 5 days. 59 days later, 10 perfect eggs were laid in a nest box full of sphagnum moss I had placed in the female's cage. I carefully placed each egg in an airtight container with moist Perlite and waited IMPATIENTLY! It had been my past experience that kingsnake and rat snake eggs typically hatch between 60 and 70 days at room temperature. But these weren't just any rat snakes. I had been raising venomous snakes and it had been years since I actually incubated snake eggs. But right on schedule, the first head emerged on day 65! 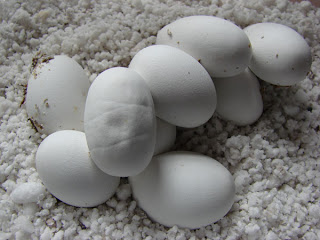 Day 64! You can clearly see striations in the top egg, indicating the baby is trying to slice through the egg shell. 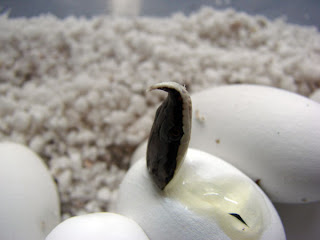 First peek into the new world! The egg tooth is still visible. 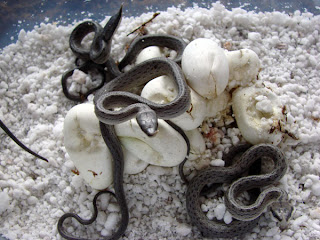 Several babies out and ready to take on the world!
Now came the challenge of trying to get the babies to feed. I had been told by one keeper the babies would readily accept guppies placed in their water bowl. Did that mean they were aquatic? I was told by another keeper to avoid fish at all cost and offer them pink parts. What gives? So began the tedious task of trying to feed these strange looking creatures (they looked nothing like their parents). Like some of our native rat snakes, baby "rhino rats" lack the adult coloration and are actually an ugly grey-brown at birth. And this whole fish thing had me thinking. If they WERE aquatic and fish eaters for a period of their life, WHY? I was discussing this whole issue one night with our friend, Leo Garrett (happens to be the smartest guy I know, MENSA, the whole genius thing) and he matter of factly stated, "It has to be the monsoons". Now, working for the National Weather Service, you might think I would have thought of that. It made perfect sense. Still, I was reluctant to start them on fish. Instead, I began offering them f/t (frozen/thawed) pink parts to see what happened. To my surprise (and joy), 5 of the 10 readily accepted the split pinks. The other 5 ate the parts with only a little assistance for the first month or so. By fall, all 10 babies were readily taking f/t pinks or pink parts from forceps with little or no teasing.
Not only do "rhino rats" make great display animals, they also make good pets. Granted, a rather expensive pet. Hatchling pairs still command between $1200 and $1400 when you can find them but lone males are sometimes available at a fair price. So, if you're looking for that "hard to come by" animal or you just want something different, I highly recommend this gentle emerald of the Vietnamese rainforest. By the way, our second clutch of eggs is incubating and due to hatch this month! 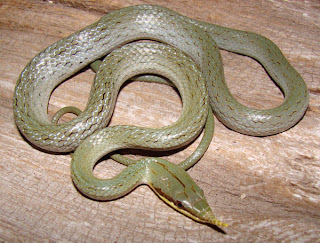 A year after hatching, one of our hold-back females beginning the onotgenetic color change.
Posted by Jim at 2:57 PM 10 comments: