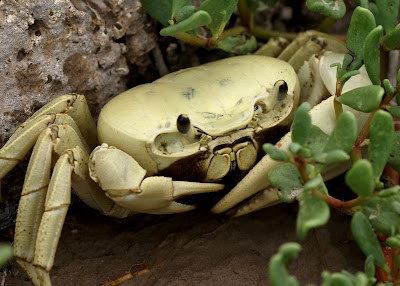 As Darlene mentioned in her blog, this past week we became emotionally attached to a crustacean, a beautiful Giant white land crab we dubbed "Ms Thing". We came upon her crossing Highway 4, near Boca Chica Beach, last Tuesday night during a light rain. Trying to catch her was no easy feat and I'm sure if Darlene had gotten it on video, we would have been hard pressed not to win the grand prize on America's Funniest Home Videos. Of course, I probably should have used something larger than a 16oz deli cup to subdue something that big. I was finally able to get her into the back of the Jeep but she decided to cram her body between the seat backs. I decided enough was enough and coaxed her into a 33 gallon garbage bag for the quick drive back home. I guess it's a good thing the agents at the Border Patrol checkpoint DIDN'T search the car. Imagine their surprise if they had grabbed the suspicious looking black plastic bag in the back of the car!
Wednesday morning was spent at the zoo where Darlene and Patty took LOADS of photos of this amazing animal, in the rain, no less. Brian and I became crab wranglers as they took photos of Ms Thing in the herpetarium's photo set.
Later that afternoon, after an emotional tug of war aimed at Ms Thing's safety, we drove back out to the salt flats to release her, where we found her the night before. Even as she walked towards the shallows, I felt a sense of sadness and worried that she was too visible from the road. We watched until she disappeared from view. 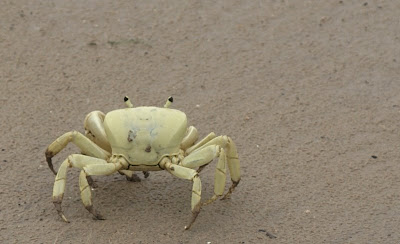 A Closing Shot as Ms Thing Returns to the Shallows
Posted by Jim at 2:23 PM 13 comments: