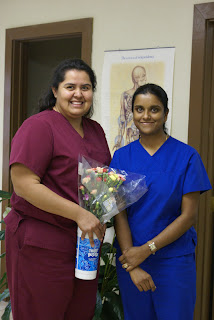 I started physical therapy this past Wednesday at the Brownsville Back School, a place I really didn't want to see again. Well, maybe for a visit to see the nice folks there but definitely not as a patient. I had undergone an aggressive 8 week session this past February and March, following back surgery in late December. But since I graciously declined the cortisone shot in the spine, as mentioned in a previous post in this Blog, this was the course of action prescribed by my neurosurgeon. I'll visit 3 times at week for the next 4 weeks.
The routine, this time, is pretty much the same. I start with fifteen minutes on a recumbent bike then do 3 sets of leg curls. Various leg and back exercises follow before I end up with a heating pad under my lower back. However this time, 15 minutes of "electric stimulation" has been added. I'm not sure what is happening when my back is being "electrocuted" but I guess the hope is to relax the muscles in my lower back. Time will tell if it indeed works but the pain is still pretty intense every time I sit down.
I'll be back for my next session on Monday and you can be sure I'll "toe the line" while a patient there. The "Babes" of the Brownsville Back School will make sure of that!
Posted by Jim at 2:27 PM 4 comments:

It's the Most Wonderful Time of the Year! 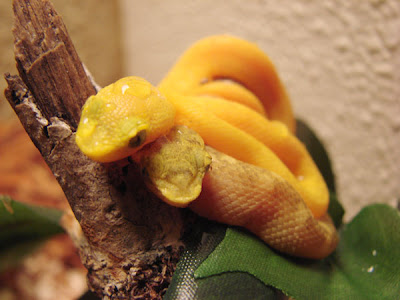 And it's not even Christmas! Well, maybe it is for me. It's the time of year I check cages almost hourly when I'm home, looking for baby eyelash vipers! Two litters have been born so far this week, one from a tiger and these little beauties from a solid lemon yellow. The one in front is the spitting image of his/her mother! These were born during the day, yesterday. When I got home from work around 1 pm, four were crawling about the cage. By the time I returned from physical therapy (another blog to come) around 3, there were nine moving about. The final count appears to be an even dozen but I've yet to move them from their birth cage. One or two more could easily be hiding under the leaves or even under the water bowl.
Posted by Jim at 5:37 PM 4 comments:

A Great Big Pain in the BACK!

I turned the corner yesterday. About half-way through my shift, I began to feel better and was able to sit at my workstation a little longer. Why was I feeling bad, you ask? You have to go all the way back to the day before Father's Day in 1990. That's when the vehicle Bill Love and I were traveling to west Texas in went airborne and rolled 4 times before coming to rest upside down.
Two MONSTER back surgeries and months of physical therapy later, one would think I'd be feeling great. Since the second surgery, for the most part, I had forgotten I was ever in that wreck. A 4 1/2 hour drive to Victoria last Wednesday night changed all that.
The pain started slowly (more of a discomfort really) much of the day Thursday while Darlene was having her all day allergy test. By Friday, I couldn't even sit without pain stabbing me in the left hip and shooting down my left leg. I stood or laid flat much of the day Friday and Saturday morning. Our plans were to drive home Saturday afternoon. If I couldn't sit in a chair, how would I be able to sit in the car for the 4 1/2 trip back to Brownsville? It was mandated that I would NOT drive and that we would stop every hour so I could at least walk and stretch. Much to my surprise, the drive wasn't all that uncomfortable and we made it home with only two stops along the way.
Now, people who know me will tell you, I don't like Doctors and would pretty much rather die than have to see one. Sunday morning, I actually called my neurosurgeon and begged for help. When pain is so intense that you can't eat breakfast at Shoney's, it's time to call for help! He gave me two options, go to the ER for a shot and x-rays then see him Tuesday afternoon or simply wait until my appointment and he would examine me then. Despite my dislike of needles, I chose the ER. I was instructed to have the nurse in the ER call him and he would order the shot and x-rays.
The shot of Torredol did little to alleviate the pain. I guess you could say it made the pain "manageable" but it never went away. Before leaving, the ER nurse said to take 800 Mg's of Motrin every 4 hours until I could get a prescription from my doctor. This is a good place to point out that my neurosurgeon is not a big pain medication advocate. I found that out while in the hospital after my most recent surgery. I was given two shots following surgery, one in the afternoon and one that night. After that, I was only given Tylenol 3, no matter how much I begged for something stronger!
Much of the time waiting for Tuesday afternoon's doctor appointment was spent flat on my back on a heating pad. I did call the doctor's office Monday morning and asked for something for pain. Much to my joy, they did call in a prescription to Walgreen's. Darlene picked up the Darvon on her way home from work Monday afternoon. Like the Torredol, it has made the pain tolerable, at best. Once in the doctor's office Tuesday afternoon, I stood while Darlene sat patiently for over an hour. Finally, my name was called. After a detailed account of the drive to Victoria and the subsequent pain, and after reviewing the x-rays, I was offered a Cortisone shot in my spine. Again, I have this needle thing and when you combine that with my spine, I politely said NO! My doctor said he was 95% sure if was inflamed muscles, probably from sitting in one position for so long. He suggested physical therapy for 4 weeks but wanted to see me in 3 weeks. If the pain is still there, he will order a MRI.
So, where does this leave me and why do I blog it? I've been in pain for most of the past 17 years, since that fateful day near Comstock. I know my body and this is not muscle pain. My worst fear would be to have another herniated disc and have to face yet another surgery. Could I do it? Yes. Do I want to do it? NO! My friend "XXXX" jokingly said to me, "you only have 10 or 15 years left so just suck it up and take the pain". For everyone who reads this with back pain, you KNOW how hard it is to take the pain for a single day.
Posted by Jim at 6:36 PM 5 comments:

That Lil Ol' Band From Texas

It seems like ZZ Top and their music have been around forever. So, when it was announced they were coming to Dodge Arena, I wasn't quite sure if I wanted to go. I had seen them years ago in Tallahassee Florida on their "Eliminator" tour. By then, they had abandoned Texas for the glitters of California and their videos with the now famous 1933 Ford Coupe were a staple on MTV. For me, they had lost some of their appeal because, after all, a Texas boy wants his Texas band to sing about all things Texas. About all I remember of that concert was they opened with "Got Me Under Pressure" and my ears hurt for days.
Darlene and I danced around whether to go or not for the past several weeks. There was a chance we wouldn't even be in the area as she was trying to get an appointment with her allergy doctor in Victoria. To complete the whole decision part of this story, it should be noted that a dear friend and co-worker was struggling with the same decision on whether to go or not. His wife's sisters might be coming to town but, if we were going, he would go with us. To make a L O N G story short, Darlene wasn't able to get an immediate appointment, his wife decided she wanted to go, tickets were purchased and we all went together.
The show was scheduled to start at 8 pm and there was little information available about who, if anyone, would open. The stage was basically stripped down with only stacks of amps on each sides of the drum kit, which clearly said ZZ Top. Still, we were left to wonder if a local band would perform. Around 8:30, the lights finally dimmed, the crowd came alive and what do I hear? The unmistakable sound of "Got Me Under Pressure". This was different from the first concert. Right away it was evident that Billy Gibbons was on top of his game. The sound was crisp and clear and not overbearing. They immediatley charged into "Waitin' for the Bus" and "Jesus Just Left Chicago". It was obvious they still remembered their roots and they knew they were home in south Texas. From there, they continued the older, Texas based songs with one of my favorites, "Heard it on the X". It was written as their tribute to the old "Border Blaster" radio station run by Wolfman Jack in Acuna. "Nationwide" and Darlene's favorite, "Blue Jean Blues" were only a few of the great old songs they played from their recording days over in Tyler. When Billy started lamenting about all the "Dollar Stores" there were in the area and his shopping trip in one, you just knew it was leading to "Cheap Sunglasses"!
One of the real high points of the concert was when Billy paid tribute to his friend and early mentor, Jimi Hendrix, by playing a scorching version of "Foxy Lady". You would have thought Jimi was resurrected and playing lead guitar!
All the songs from the MTV days followed but this time, I didn't mind as much. This was the ZZ Top I loved listening to during my last years of high school and the years that followed in the military. I remember an interview in the 80's when Frank Beard was asked to describe their brand of music. His reply was "below the waist rock and roll". Maybe that's when I thought they had abandoned their Texas roots. After seeing them live again this past Friday night, I don't think they ever really abandoned their roots at all!
Posted by Jim at 1:51 PM 3 comments: