My Lateralis Are Blue, But That's a GOOD THING!

Every once in a while, Lady Luck hits you right smack dab in the head with something that's just too good to be true. That was the case when, in June of 2006, I purchased a pair of newly imported, weeks-old Bothriechis lateralis, more commonly known as the Side-striped palm pitviper. From time to time, I had seen freshly imported adults for sale but, from bad past experiences with imported, wild-caught snakes, I never took the chance. Imported babies, on the other hand, were too tempting to pass up.
They arrived promptly in McAllen on Delta Airlines on June 26th at 12:52 pm. But, anyone who has ever shipped live snakes knows the nightmares that evolve during the process and this shipment was no different. Even before leaving Brownsville for the hour-long trek to McAllen, I had called Delta Cargo to make sure the snakes were en route. Yes, I was told, and the flight from Atlanta was on time. Upon arriving at the Delta Ticket Counter in McAllen, I was told no live animals were on the flight. Before I pitched too big of a fit, I asked them to check for a Delta Dash package. Yes, it was on board and the air bill number matched. I started to wonder exactly where they had put the box since "no live animals" were on the flight. Was it actually in the plane or stuffed in the non-pressurized luggage hold. Would the snakes even be alive?
Once the box was brought to the counter, I was asked to sign off on the air bill. By signing, you're giving your assurance that the contents are alive, undamaged or whatever the case may be. Since I didn't know where the box had been during the flight and the gentleman at the counter couldn't tell me, I refused. I then asked if I could open the box to check if the snakes were alive. "NOT IN THE TERMINAL", which was exactly the answer I expected. I quickly walked to the car and unscrewed each wood screw with my re-chargeable screwdriver. Upon removing the lid, two small brown heads looked curiously up at me from inside their individual deli cups.
In their native habitat of Costa Rica and Panama, lateralis (as they're known in the herp world) are typically emerald or bluish green. A very few prized specimens in private collections are brilliant turquoise blue. When I purchased mine, I had no way of knowing that with each shed of their skin, a special color would emerge. Lady Luck has indeed smacked me. 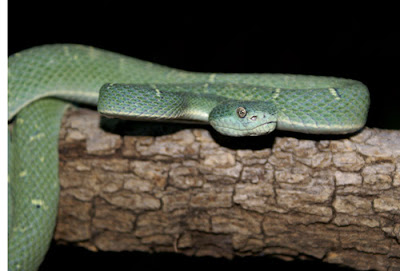 The typical color phase of the Bothriechis lateralis. This is one of our "normal" males. 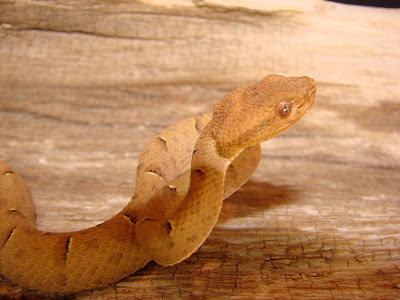 After a few meals, the new babies pose for photos. This is the male. 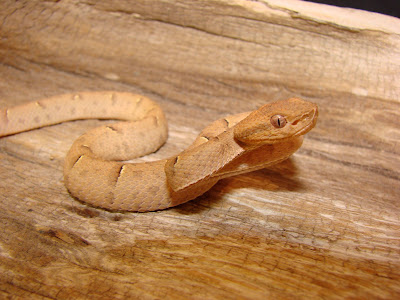 This is the female. 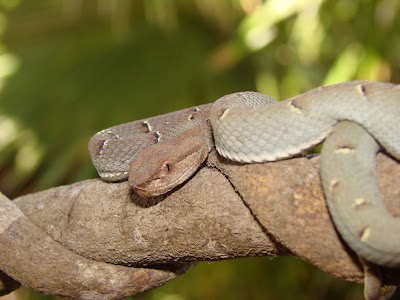 Several months later, the female, in the middle of her color change. 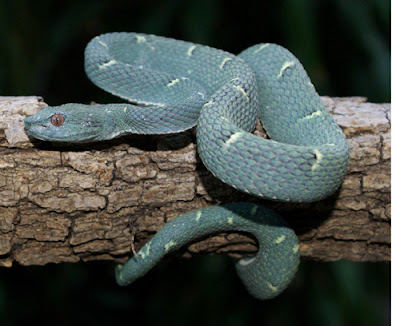 The male showing off his adult colors this past Sunday evening. 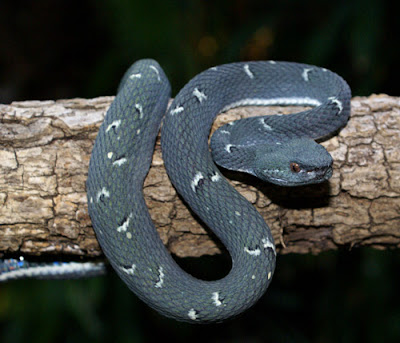 The female with her black mask and smoking "gun-metal blue" color.

Recently, I've posted the female's photos on two different venomous snake forums so people around the world can see her special color. So far, no one has seen this color in an adult lateralis. Just how rare is she? That's the question I hope to soon answer.

Several times a year, Mother Nature plays a prank on me. The smell of rotting flesh sends me into a panic, making me wonder if someone has placed a sizable dead animal in our yard to make some kind of point. The classic "horse torso" scene from The Godfather usually comes to mind. I quickly come to my senses after I realize our Stapelia gigantea is blooming.
The Stapelia gigantea is 1 of around 90 species of succulents called Carrion Plants. This particular species is native to southern Africa but was given to us many years ago as a house warming gift by a fellow herper. Several times a year, and typically after a heavy rain, it produces huge buds and flowers, which measure 8 to 12 inches across. Each flower is 5-pointed. A number of common names have been derived from the star-like appearance such as Hairy starfish flower, Star cactus and Starfish cactus. The last two names are a bit misleading since it's not a cactus at all.
So why the odor? These flowers have evolved to produce properties that attract flies. As I mentioned earlier, the odor is strong and putrid, similar to decaying meat. The flies are lured to the flower and, in turn, pollinate neighboring flowers as they move on in their search for a host to lay their eggs. Personally, I like the good ole bumble-bee and simple wind pollination systems better but, you have to admit, the flower is something to behold. 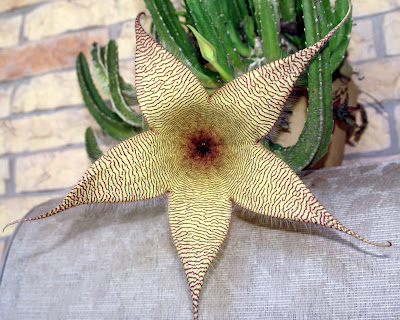 Surely, You've Made a Mistake!

I've always admired writers. I don't mean "bloggers" like myself who attempt to write. I mean real writers. People who are good enough to put words into meaning and can even make a living doing what they love. I envy such gifted souls. So what a surprise it was when Darlene showed me a "Google Alert" she received this morning that La Vibora had been given the Blogging With a Purpose award from a REAL writer, L.A. Mitchell. What? La Vibora has a purpose? Surely, she made a mistake!
OK, it probably helped that we had supper with her and her husband last Tuesday night in Port Isabel. You see, we've actually known them for some time but, like most people in today's rat race, we really haven't kept in touch that much for over 8 years. It's sad now that I think about it. We had such good times together back in the mid and late 90s before they left Brownsville for greener pastures. After all this time, it was a pleasure to catch up on their lives and family.
I know I'll have an even bigger complex about my writing now, knowing that a real writer is reading it. I encourage you to take time to visit L.A.'s website and be sure to spend time reading her blog. You'll recognize she has a gift for writing from the first sentence.
Like so many of her peers have stated, "one day I'll be able to say I knew her when".
Posted by Jim at 12:27 PM 13 comments: