Signs of Spring (In the Inflation Building)

Through the years, I've learned to always look DOWN when entering the inflation building at work in the wee hours of the morning. You never know what's going to be scurrying, crawling, hopping or lurking on the floor at that time of the morning. That doesn't even take into account what might drop on you when raising the overhead doors! I've encountered rabbits, opossums, millipedes, centipedes, scorpions, countless numbers of tarantulas, Gulf coast toads, insects of all shapes and sizes and even a snake or two. So it was nice to finally see signs of life late last week, after our colder than normal, seemed like it would NEVER end, El Nino winter. Our overnight lows had finally inched up into the lower 70s, optimum for all creatures, large and small, to emerge from their winter naps.
As I entered the building last Friday just after 5 am, an odd shape immediately caught my eye on the unfinished cement floor. It was no bigger than the end of my thumb but I knew it wasn't supposed to be there. Suddenly, a short hop and I recognized the odd shape as a Narrow-mouthed toad. I had never seen one in my 16 years living in Brownsville although I had heard their distinct calls from our infamous "moat" that surrounds the office. The moat is nothing more than a poor attempt at a drainage ditch that fills up when the resaca across the street overflows during a heavy rain event. But, when filled, it teams with all kinds of creatures, including crayfish, frogs and even carp. So after finally seeing my first Narrow-mouthed, the first thought that went through my mind was "photo subject!" I easily caught the tiny amphibian and dropped it temporarily into a balloon bag while I went about the business of inflating the weather balloon. Back in the office, I transferred my subject to one of the many plastic containers, conveniently tucked away in my cubicle for such situations.

On-line references suggest that Narrow-mouth toads actually share burrows with tarantulas where the two (apparently) live in harmony. We have a large population of Texas tan tarantulas living around the inflation building so that probably explains why the toads have chosen to reside on Weather Service grounds.  And despite their miniscule size, they project a BIG sound.  Their call can best be described as a high pitch buzz, much like the sound of a summer cicada. On quiet, calm nights, the chorus can be heard some distance away (click to hear.)


After a quick series of photos, I'm happy to say I released my friend early this morning in the culvert that stands in front of our inflation building. I hope to see more in the future and I hate to think it might take another 16 years!  Regardless, I know I'll enjoy a chorus of toads, maybe as soon as tomorrow evening, when the threat of rain again brings out their song. 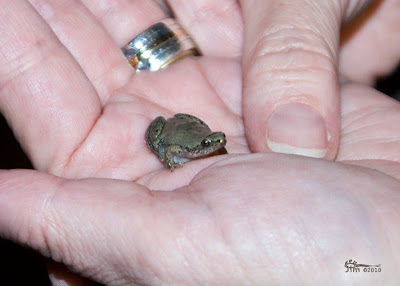 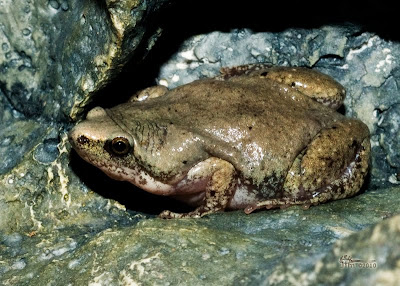 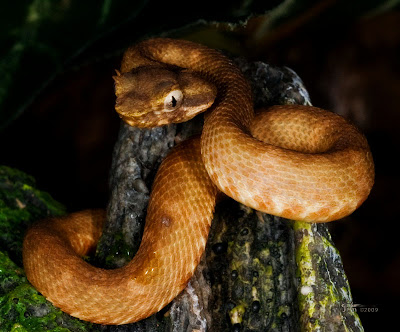