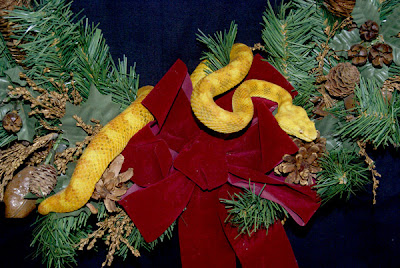 May your Christmas Wreaths be full of eyelash vipers! Darlene and I wish everyone a very Merry Christmas and the best for the coming New Year!
Posted by Jim at 11:45 AM 3 comments:

If You Feed Them, They Will Come!

In my previous post, I mentioned how living on a resaca afforded us the opportunity to see many forms of wildlife while living in the city. In an even earlier post, I told of my fondness for opossums. It's plagued me since childhood so I doubt I'll ever get over it. So, it should come as no surprise that when I recently saw one walk by the patio door, I decided to try and get a closer look by offering it food.
I began leaving red grapes, bananas and even sliced oranges as an offering only to find the plate empty the next morning with no sighting of an opossum. That all changed last week when suddenly, there was the opossum eating it's nightly offering of fruit right in front of the sliding glass door. It was a nearly all black specimen and, I feel quite sure, the sibling of the one I rescued in the pool earlier this year.
The nightly ritual continued as the opossum began to show up on the patio just after sunset. Although still shy, it seemed comfortable watching us watching it eat. Saturday evening, I went through the routine of preparing a meal for the opossum, including some cat food now for protein. It showed up right on time. About a half hour later, another opossum suddenly appeared, much the same size but obviously lighter in color. For the first encounter, it seemed totally at ease watching us and it even looked up at the television a time or two! I feel sure, too, that this is another sibling because of the size similarity.
If you're at all interested in learning more about these fascinating animals, check out the National Opossum Society. I totally agree with their philosophy, "it's nice to watch an occasional opossum waddle by". It's even nicer when they spend time with you in the evening. 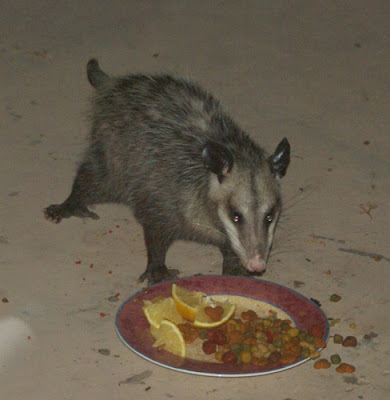 The opossum that showed up this past Saturday evening. Since then, it has been a nightly visitor but always AFTER the black opossum. 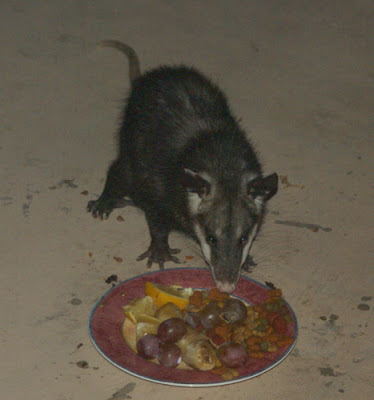 The nearly all black opossum that began visiting last week. He/she shows up minutes after sunset.
Posted by Jim at 8:47 PM 9 comments: